Yesterday Prince Harry married Meghan Markle in a beautiful ceremony in Windsor and the world watched. 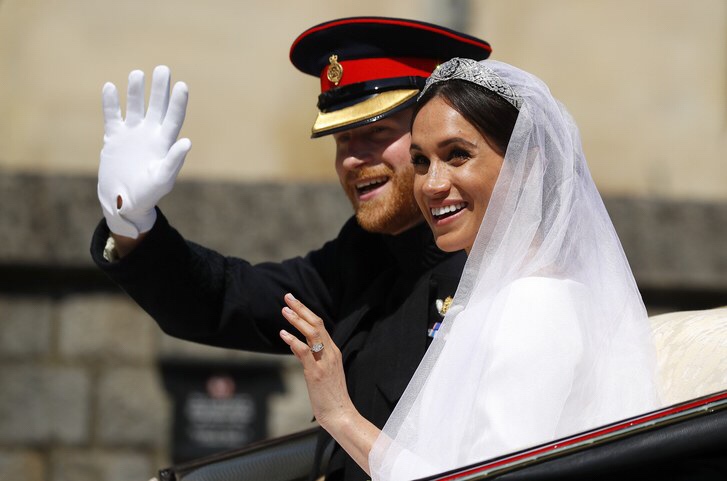 I ended up watching all of it seeing as I am sofa-bound after hurting my coccyx in a fall the day before (I’m refraining from telling people that I broke my bum). And I have to say that this was no punishment because I loved it. I loved the brothers looking handsome in their uniforms, her tiara, the identical twin pageboys, the celebrity guests, the enthusiastic American preacher, the awkward looks from the royals whilst they were watching the American preacher… it was all just fabulous as far as I was concerned.

I followed it along with Twitter which if you don’t know is just the funniest way to watch something like a royal wedding or any public event that goes on for hours. Especially if your husband is outside mowing the lawn and you’ve broken your bum and can’t really move much.

There was much celebrity spotting and fashion critiquing.

Amal Clooney attended with her husband.

Incidentally Amal seemed to win in the fashion stakes – her Stella McCartney dress sold out in mere minutes.

My husband’s boyfriend, Idris Elba, looked… well… flawless as usual (my husband truly thinks that Idris is the coolest man on the planet and probably loves him more than he loves me).

There was a great cheer when the Beckhams arrived. David smiling, Victoria pouting. Her outfit got a thumbs down from me I’m afraid. Erect nipples showing through your dress and a g-string VPL are not a good look at any wedding, let alone a royal one. 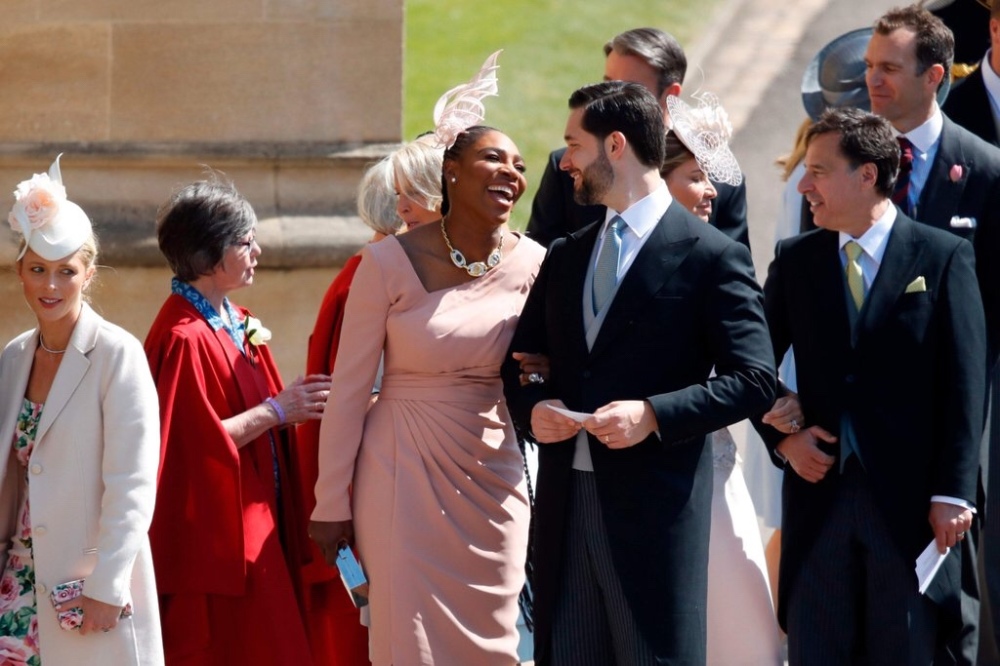 The cast of Meghan’s show “Suits” all dressed up for the occasion.

The best of which I thought was statuesque Gina Torres who looked gorgeous in red.

For me the Stand Out Guest Award goes to Kitty Spencer. Daughter of Princess Diana’s brother, Harry’s cousin really ticked all the boxes. Drop dead gorgeous.

Now, there was a plethora of opinions on Twitter. Good and bad. Many people referred to Princesses Beatrice and Eugenie as “The Ugly Sisters”. There was much disappointment that they’d opted for more subtle wedding outfits this year. 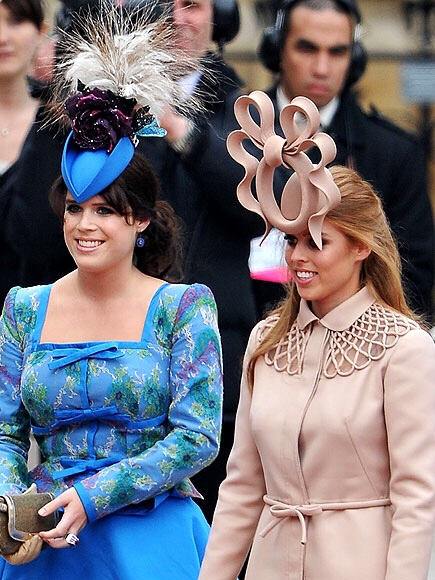 When Fergie arrived, Twitter exploded with loathing. People even comparing her arrival to that of the Disney witch Maleficent arriving as the unwelcome guest at the christening.

There was a tweet that said “Watching Harry and Meghan’s wedding. Pity neither of their fathers could make it”. Oooh bit close to the knuckle there!

There were royalists gushing at every moment and anti-monarchists complaining about the cost of it all. People moaned about Harry’s beard (he got special dispensation from the Queen), made fun of shy Prince George (who I remind you is only 4 years old) and sniped at “fat Zara” (she’s heavily pregnant, folks). But this is the nature of things. You’re never going to please everyone.

So Meghan is now Harry’s wife, the Duchess of Sussex. I think we can all agree that it hasn’t been an easy road to get there. Not because she’s bi-racial. Or divorced. Or an actress. Or American. But because her family have tried to sabotage her relationship and therefore the wedding since the off.

Where to begin? You can google all the gory details but some titbits include her half-sister writing a tell-all book, a talking head on any TV show that will slag Meghan off at every opportunity, a half-brother who wrote an open letter to Harry telling him not to marry her, a father who sold photos to the paparazzi… it’s been grim. I cannot imagine how humiliated Meghan must have felt with the unveiling of each new story. She only had one member of her family at the wedding, her mother Doria.

So with this in mind, swept up by the romance and loveliness of the occasion, I tweeted this. 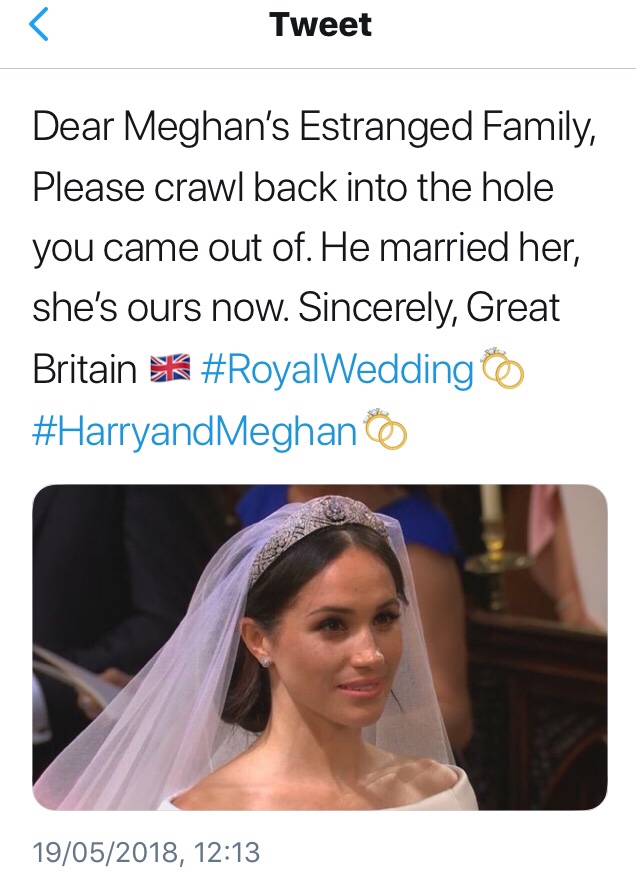 It was supposed to be a tongue-in-cheek dig at the less-than-admirable behaviour displayed by members of Meghan’s family. I say tongue-in-cheek because I am not being serious. I am not under any illusion that I speak for all of the British public. It was just one of a million tweets that afternoon. But of course there were people who got their knickers in a twist about it *eye roll*.

This is when someone needs to explain the term “freedom of speech” to people. Let me be clear. I can think and say what I like. I am not a person with particular strong influence over people. I do not speak for a religion or political party. I am not famous. I do not hold a position of power within the government. So frankly, who cares? Oh but some people do care. The Offended Police care a great deal. They tweeted me and some were very aggressive. Most had very poor spelling and grammar. A couple couldn’t help but tweet rows and rows of expletives with lots of exclamation marks (I mostly blocked those, life is too short).

“I really enjoyed that episode of Emmerdale”

In the end I just told them to calm down and have a cup of tea. The vast majority of people liked or retweeted the tweet. It was all very positive and life affirming on the whole.

I didn’t message a single person who had tweeted anything I disagreed with about the royal wedding. Why would I? I am intelligent enough to understand that we don’t all agree and that’s fine. People are entitled to their own opinions. JUST LIKE BLOODY BREXIT.

I for one accept Meghan into our royal family and I hope she and Harry will have a happy future together. Maybe it will last, maybe it won’t. There’s no way to tell at this stage. But I do know that she has really good taste in coats and handbags that I fully intend to copy to the best of my ability.